Bart Ehrman: Not a Christian 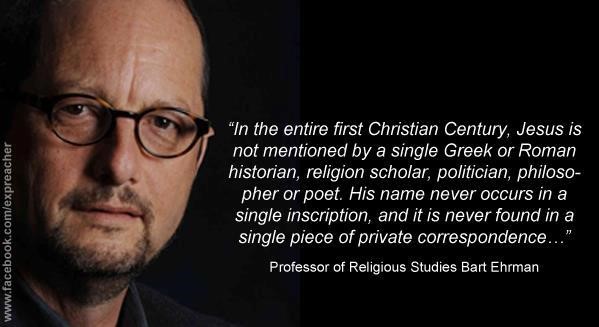 Bruce Gerencser reproduces a recent post from Bart Ehrman’s blog, Why I Am Not a Christian.

I told my students that the apocalyptic Jesus realized that ultimate reality and true meaning do not reside in this world. Following Jesus means to realize that ultimate reality resides outside this world, in a higher world, above this mundane existence that we live in the here and now. I stated this as emphatically as I could. Students surely thought I was preaching, that I was affirming this message. I made the statement as rhetorically effective as I could.

And I’m not sure I’ve ever said it this way before in my 32 years of teaching. When I said it I had two immediate mental reactions to what I had just said: (a) I realized that I really do think this is Jesus’ ultimate (apocalyptic point) and, even more graphically, (b) I don’t agree with that view at all.

My personal view is just the opposite. My view is that there *is* no realm above or outside of this one that provides meaning to life in our world. In my view this world is all there is.

I reproduce the image above from Gerencser’s posting because it makes a point that the average man or woman out in the pews doesn’t know — and the average pastor never admits. There is a legitimate, serious question about who the man Jesus was. There is no — NO — contemporaneous historical evidence that he ever even existed; whomever he was, he certainly was not the 1st-century hippie-celebrity of Sunday school.