I was surprised to learn a while back that the only murders committed in decades in Houghton County, Michigan, were committed by a guy who graduated from Michigan Tech just one year ahead of me. Given the small size of the campus and town, it’s all but certain that our paths had overlapped, that at some time or another we had sat at tables near to each other in the Student Union building or one of the town’s few bars or at a hockey game, or that I had waited on him at the library when I worked there. We may have taken some classes together.

Kathryn Nankervis, 20-years old, was reported missing from her home in L’Anse, Michigan, about 30-miles south of Houghton at the bottom of Keweenaw Bay, on June 10, 1991. In 1991 the population of L’Anse was about 2200-people, but few students lived there; the rents were cheap, but it’s a long drive to campus in a winter blizzard. It’s exactly like thousands of other faded little towns whose industry is gone: if you don’t get out when you’re young, you never get out at all.

She took no identification with her, and left behind a 2-month and 21-month old child.

June 15 there appeared a brief newspaper item saying that the police suspected foul play in Nankervis’ disappearance but had no clues to what had happened. Two weeks later a similarly brief newspaper item reported that a body had been pulled from the Portage Canal near its discharge into Keweenaw Bay. The body was identified as Nankervis, but long immersion in the water left little forensic evidence. No matter; the police hadn’t seen a murder in decades, and probably wouldn’t have known what to do with evidence anyway. In the Keweenaw, policing consists mainly of breaking-up bar fights and getting everybody home in one piece.

And so much for Kathryn Nankervis, an obscure, 20-year old small-town mother of two illegitimate children. The commonplace assumption was that, being a slut and all, she had hooked-up with a long-gone traveling salesman and come to a bad ending. Too bad, but that’s how it goes when you’re easy. The case went cold.

The next murder occurred 7-months later, and that was big news. It happened in downtown Houghton at around 2:30 AM on a brutally cold January night, and the victim was a popular Michigan Tech student who had been out jogging. Jodi Watts had been stripped, raped, stabbed, and left for dead less than 100-feet from the front door of the police station. She was discovered by a passerby who covered her with his coat and ran for help; she died soon afterward at the local hospital.

The campus police were authorized to carry sidearms, and the University offered escorts to nervous women. An appeal for reward money quickly yielded $10,000.

There is no evidence that the second murder was linked in the public mind to the murder of Kathryn Nankervis, the single, small-town mother whose body had been pulled from the Portage Canal 7-months earlier; she was gone and forgotten.

In spite of the widespread attention, and vastly greater state and federal resources put to the case, the murder of Jodi Watts went cold, too.

The end was anticlimactic, with scarcely any drama at all. Six months later, the Hancock police received a frantic call from a woman who said a man was trying to break into her apartment. 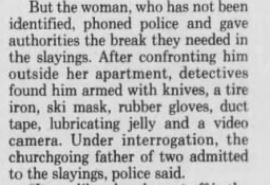 The killer was a local man who worked for the Social Security Administration. He quickly confessed, pleaded guilty at trial, and was sentenced to life in prison without the possibility of parole. He told the court at sentencing: “I’ve reflected on it for some time, your honor, in the word of God and in prayer. I felt I was influenced by Satanic forces at the time of the crimes.”

I’m put in mind of the sad story of Shelby Rigsbee, the Durham, North Carolina prostitute whose killer was sentenced to probation. She, like Kathryn Nankervis, was on the outskirts of polite society; her death was scarcely noticed, and not much effort was given to finding justice for her.

The irony is that, though it’s true that violent crime might strike just about anywhere, it most often does strike amongst those for whom there is little public sympathy or concern. The obscure, the out-of-step, those with no knack for fitting-in — they know that: Nobody cares if they leave the party early.