According to the campus weather station, the Michigan Tech Huskies walked to class in -3°F weather this morning, and NOAA says that it’s going to get a lot colder during the next few days. 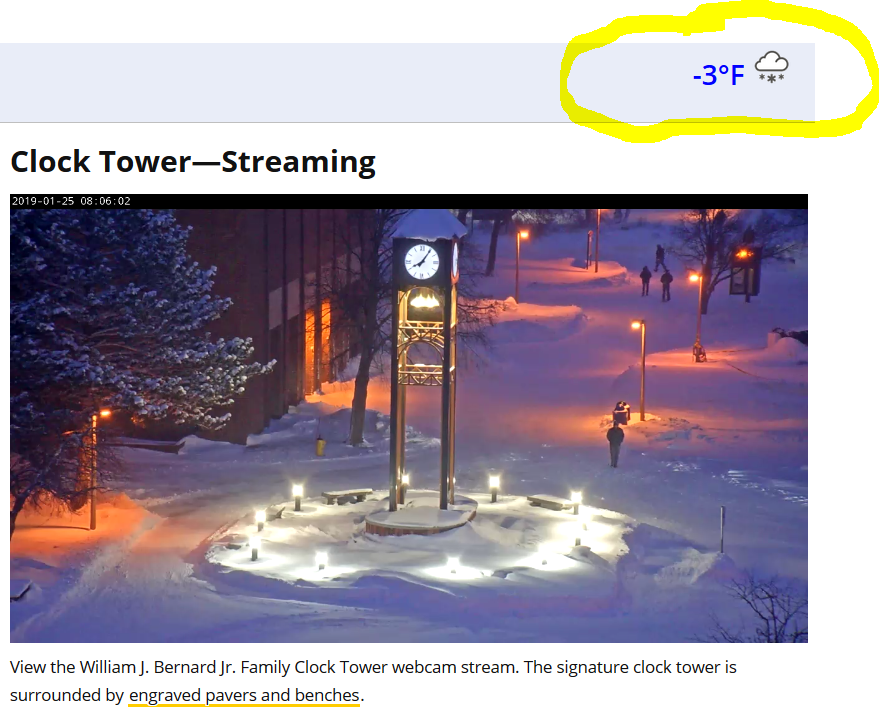 This is miserable stuff, and it is worse when the wind is pouring in off Lake Superior at 50-miles per hour; there isn’t enough wool and down in the world to keep you comfortable. There is an upside, though: The awful winters, and the designation of the south side of Lake Superior as a National Lakeshore, assure that Michigan’s Upper Peninsula will never be Disney-fied and overrun with t-shirt shops and kitsch made in China.

In fact, one of the di rigeur tourist stops in the western U.P. has a distinctly 1950s, Rock Hudson/Doris Day-ish sensibility.

Back in the first half of the 19th-Century, one of the U.P.’s best-known figures was Bishop Frederic Baraga, known as the “snowshoe priest” because showshoes were what he used to get around in the winter — and I’m not talking about between his cabin and his church. No. Bishop Baraga walked across the entire U.P. on his snowshoes, and took several trips to the Lower Peninsula as well.

Today, there is a shrine to Bishop Baraga, and a serious effort afoot to get him canonized. 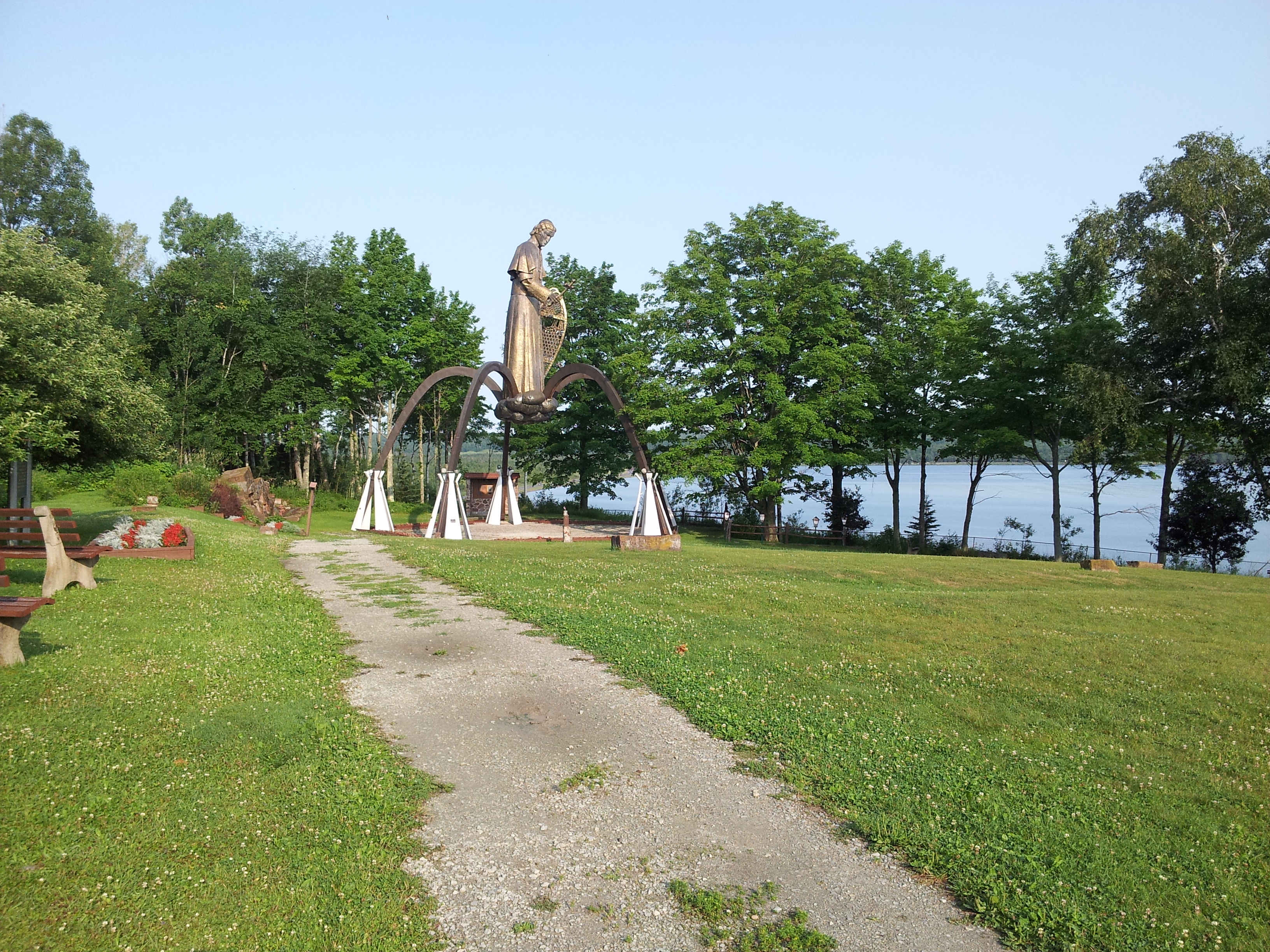 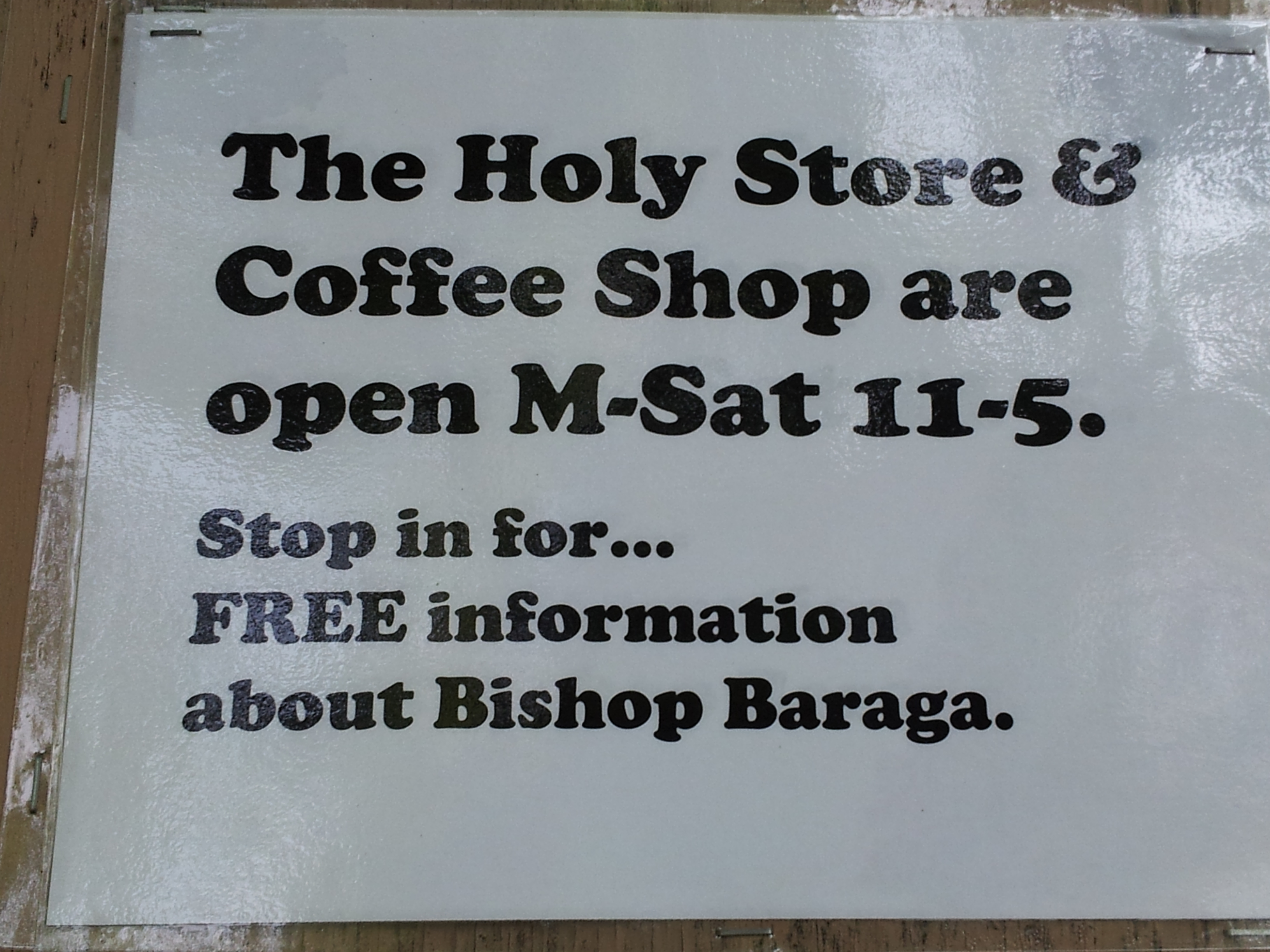 That’s Bishop Baraga in the clouds, with snowshoes handy just in case the Boss has a bad day. For a sense of the scale of this thing, notice Dawn standing w-a-a-a-y down below.

The shrine is operated by Sister Maria, and we somehow ended-up on her mailing list; three or four times a year we get a chatty letter (and money beg) from her. Just yesterday there came a letter with this uplifting tale:

In the fall of 1847 Father Baraga was visiting Fon-du-Lac (near Minnesota) and instructing his beloved Natives. He was told of a very old blind pagan lady hwo had requested the “Blackrobe”. Immediately he proceeded to her lodge with the Christian woman who had been attending her and who had brought the message to him. The old woman, who had been abandoned by her own famiy, but taken in by the Christian woman, was feeble and nearing death. Upon Father Baraga’s arrival, the poor woman stretched out her hands and pleaded with him to have pity on her. In his deep love and compassion, he instructed her in the most essential points of our Christian faith, and because she desired it, planned to baptize her the following day. As he took leave of the lodge, he felt an inspiration to return at once and baptize the woman. He did so. How great was his joy upon hearing the following morning that the woman had died peacefully in the night, having fallen asleep in the Lord, literally!

The story is hokey, and unintentionally humorous at the end, and I’ve heard close variations of it in Protestant churches all my life; with people dying all the time, though, and an infinity of busybodies from sea to shining sea … who knows? Maybe it’s true.

What I do believe is that Sister Maria believes it, and rejoices; she is sweet and sincere and, however ridiculous I think it is, I’m kind of rooting for Bishop Baraga’s canonization before Sister Maria checks out, because it will give her a lot of pleasure.

Geography shapes culture, and those miserable winters are an indispensable part of the U.P.’s gentle and likable culture. I hope it survives global warming and the associated climate change.