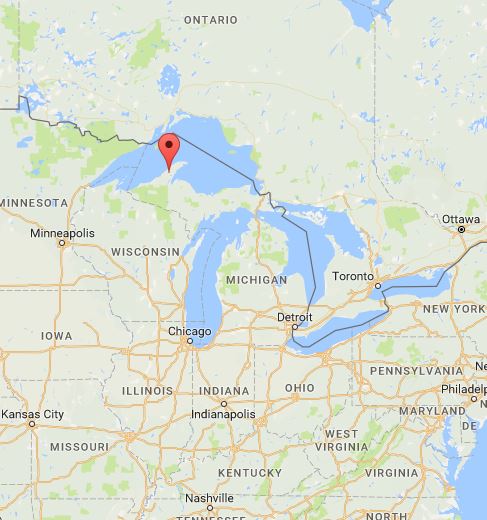 I posted a few weeks ago about America’s earliest known miners, the aboriginals who dug copper from pits in the Keweenaw Peninsula about 5000 B.C. It’s one of those odd historical tidbits that gets stuck in my head and doesn’t go away until I’ve learned more.

The first thing to know is that the copper found in Michigan’s Upper Peninsula is pure native metal, the same stuff from which pennies used to be made. As the magmatic fluids penetrated cracks in the surrounding rock, it cooled and the copper precipitated out. So there were seams of pure copper in the rock. The first miners heated the rocks until they cracked and the copper could be separated. Traces of those old works remain, and Carbon-14 dating makes it possible to know that the mines — hand-dug pits, actually — were active about 7000-years ago.

The picture below is native copper collected by me when I was at Michigan Tech, and sits on my desk. That’s a 3/16-inch grid. 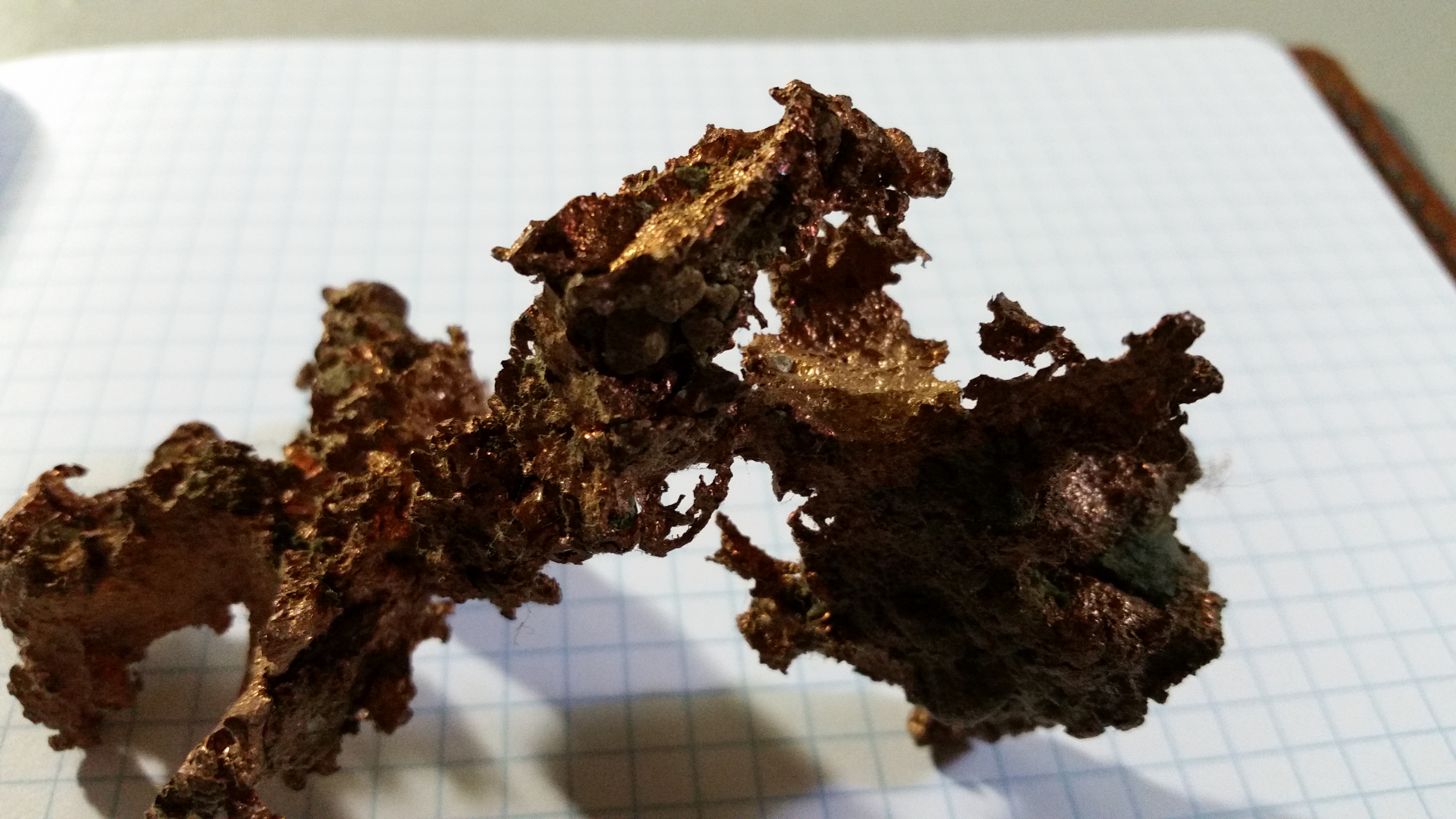 But wait! There’s more! The Keweenaw Peninsula is the only place in North America where native silver has ever been found intimately entwined with native copper — and jewelry made of entwined silver and copper has been found by archaeologists in Central America. The plain implication is that those ancient miners had established far-reaching trade.

Seven-thousand years ago — more than 3000-years before Atrahasis, the first iteration of Genesis — there were mining and trade in North America.

Who were those people?

There is almost nothing known about them, and that only inferentially. We know, for instance, that they mined and traded, and so we can reasonably assume they had some sense of numbers and a rudimentary way of keeping accounts; we know nothing about that aboriginal math, however, or how they did record-keeping. That, in turn, suggests the use of perishable materials, perhaps marked birch bark? Nobody knows.

Whomever they were, the aboriginals on the southern side of Lake Superior were succeeded by the Ojibwa Indians, a branch of the Chippewa. Geography shapes culture, which in turn shapes religion, and the Ojibwa were a peaceful people, indulgent of children and generous-minded toward strangers. That makes sense, for the waters and woods are full of food, and there is no shortage of building materials. Whether or not the same thing might be said of the earlier miners is difficult to know; they probably tended to be jealous of their mineral wealth.

I’ve picked-up a few books about the Ojibwa during the past month, thinking there might be at least a cultural memory of the people they succeeded. Nope. Maybe they were gone by the time the Ojibwa arrived.

The thing that has most surprised me over the past few weeks of amateur anthropologizing is how little research has been done in this country about the first Americans. There is some academic literature, certainly, but it is sparse to begin with and there have been no sound popularizations of that research; what is available tends to be of the Princess Brighteyes’ Book of Shamanic Potions variety.

But thinking about these things has implications for other things. Where the land was generous and indulgent .. so, too, were the people. It cannot be a coincidence that the aboriginal people of the upper midwest were peaceful, but those of the much harsher American west were aggressive. Similarly, it cannot be a coincidence that the Abrahamic faiths, spawned in the bleakness of Mesopotamia, tend toward dog-eat-dog cruelty.

Our libraries groan with minute parsings of those cultures and religions and their imperialistic migrations to places they didn’t fit and introduced only misery — and are almost barren of information about those people who created a way of life fitted to here. Gore Vidal was right: Monotheism is the greatest disaster to ever befall humanity.